Why networking technology giants stumble at the gates of SDN, NFV & SD-WAN?

Blog » Why networking technology giants stumble at the gates of SDN, NFV & SD-WAN? 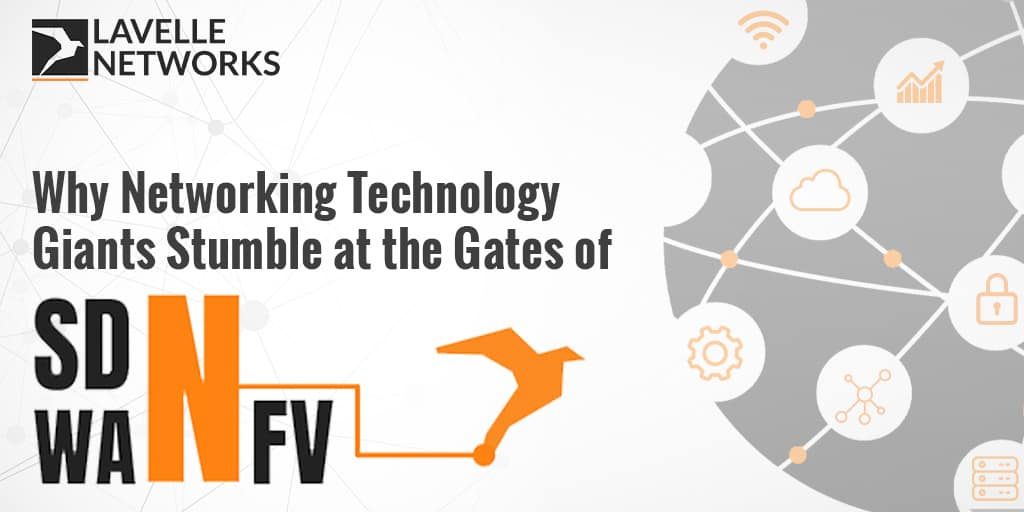 Even if you are a fence watcher of networking trends, the words – SDN, NFV & SD-WAN are probably familiar to you. We in the industry have tossed these around for close to a half a decade now, and yet the networking technology giants of our time continue to stumble at the prospects these technology trends bring to deliver what customers everywhere want – super fast, super simple, super safe networking. We have said this before, that it is time for networking to work like electricity. The digital world we so desperately need to usher in will not happen without SDN, NFV and SD-WAN.

Every industry goes through transformative inflexion points, which change the well established models, and often first cause a deflationary impact, where the cost of the technology dives, which in turn increases the market which can be serviced, and new players are born which lead in the new normal. The reason an IBM or Dell or HP is not the public cloud company the enterprises wish they had, but it is AWS has roots in the same cause. Why would one chase a business where a virtual machine was available for 0.05$/hour when servers sold for thousands of dollars?

Networking has been a hardware centric business, where software was an after thought in the business model. All of today’s networking giants used to give away their networking software for free not so long back. The value models were built on a cost of hardware plus enviable margins due to market leadership. Fireside stories were exchanged of how the business was profitable even if the products were sold at 98% discount to the list price, in emerging markets.

We leave it to your imagination the profitability in the older economies of the West, where such discounting is not needed. However, like the mobile phone industry, and many other technology industries, the hardware business has become an economies of scale equation, thanks to Intel, ARM, Qualcomm, Broadcom and Marvell. These companies have successfully made hardware processors and chips a part of all our lives, and it is now possible for most companies to access the economies of scale, as long as their software can be designed for low cost, low power hardware.

Suddenly, the mobile phone industry where one would have never imagined it without a Motorola, Nokia, Ericsson or at the least the venerable enterprise workhorse – Blackberry, is now ruled by dozens of new phone companies (and these companies did not even exist a decade back) which use the hardware scale revolution mentioned above. More importantly, the kingpins in the space are now mobile application companies, where a smallish team of smart, dedicated, passionate software engineers can rule the market – think WhatsApp, Slack, Zoho CRM. SDN, NFV and SD-WAN are going to do the same thing to enterprise networking technology.

The sheer market momentum behind SD-WAN is in a way fuelled by the initial frustration with SDN & NFV. The first wave of SDN companies focused heavily on data centre switching, only to find that the market moved from several potential customers to a few, as the timing got entangled with the rise of the public cloud – AWS, Azure, GCP, Ali Cloud. Enterprises started to shrink their spend on data centres and instead moved more and more to private and public clouds. The SDN technology providers who survived and rose are the ones who were able to sell into the public cloud providers. The rest consolidated or disappeared.

In a way, the lure of replicating the massive success of virtualisation-as-a-service (a.k.a AWS) using a Telco data centre, caused the industry to underestimate the sheer skills, talent, and software understanding that is needed to transform a Telco to an NFV world. Just like the Telco Cloud initiatives have all but vanished, so also NFV became a case of sour grapes. Enter SD-WAN!  The cloud was everywhere, and all enterprises meanwhile were struggling with networking during or post their migration to the cloud. SD-WAN has three kinds of market drivers:

This diverse buyer landscape is the single biggest reason, that SD-WAN is roaring its way to growth and success with a healthy mix of classical vendors (from acquisitions), new players, and mixed-bag players (These are companies like UTM or WAN Optimisation which quickly add a couple of SD-WAN features).

Does the industry need to Adapt?

You bet. We feel that we don’t need to look beyond Adobe to see how such a transformation can be done. Adobe is one fine example of how they adapted and became a $4 Billion SaaS company by re-shaping their core business model. The company was already reigning high with their Creative Suite 6 in 2011, CS6™ being their main breadwinner.

Even though they continued with the product, Adobe also launched Creative Cloud™ in 2012. Though the launch brought in a mixed reaction from the consumers and stakeholders because of the subscription features and services, Adobe stuck to their plan and continued with the new product alongside their existing hit CS6™. The below-mentioned figure would show the eventual success of CC and the effect it had on the revenue of the company.

The networking industry needs to shed it’s hardware centric models and adopt a SaaS model, where the products and services are built for the cloud first. We do see that there are half hearted steps being taken to migrate a one-time capital expensed license to an annual or monthly license, but that is not SaaS, that’s just shifting revenue models to look like a SaaS business. In a true network SaaS business, the customer is being “relieved” of doing mundane networking chores, and all of that is automated using intelligence and software in the cloud, and all of this delivered over extremely low cost hardware.

That is exactly how enterprise application SaaS is done, we use commodity hardware in large public clouds, and use the automation of the SaaS to do stuff that the enterprise IT would do. For e.g.; file sync in a Box or Dropbox, mail archiving/inbox management in a O365 or GSuite, database management in a Salesforce. These core repetitive manual tasks have been moved to the cloud, and so SaaS is beneficial. The networking giants of today need to adopt this thinking. How do we continue to innovate so the hardware costs keep falling, and networking administration tasks can be moved to automation in the cloud, so our networks ……just….work.

Features are the new “commodity”

Customers today want enterprise networking features to be modular, applied on a pay-per-need basis, and are willing to use the same hardware everywhere, provided the software features turned on are different on each hardware instance. Just like in a SaaS, every subscription user can potentially use a different plan or feature.

They want a world, where the same hardware or similar hardware is used everywhere (like in the cloud where ubiquity of server hardware is powerful), and networking features are delivered as software modules which one can sign up for. This needs a change in the networking engineering team’s thinking, and software architectures. Only in an SDN architecture, where a network controller is designed to operate the network, can such a paradigm shift be implemented.

Policies, and not Protocols

Enterprise customers have no more patience to understand protocols or configure them. They are only interested in the policies they want to implement (Eg; Block Facebook, Prioritise Skype), so endless wizard screens to “simplify” network protocol configuration or trouble shooting is not going to have a market pretty soon.

The networking platform needs to do all of that, but cannot expect value for doing all of that. Just like we pay for the electricity based on the wattage we consume, and not based on the complexity of the step-up/step-down transformer systems which bring them to us.

Protocols are needed for interoperability, so multiple technology providers can create the network. Protocols are important, and they continue to be. IETF drafts are still being written in a proliferous manner, and it should. But what we offer to customers as an industry needs to be more than protocols, it has to be Policies.

The Triumvirate of Cloud, Internet, and Network

It’s happening. It’s true. The Cloud, the Internet (a vast planet scale network of its own), and our enterprise networks are converging to create a unified experience for the application users. Enterprise networking will need to re-invent its business models in order to provide true value to customers.

The first wave of change has hit us – SD-WAN has proven that new upstarts can power their way into the market to tap the latent demand for Network SaaS. In another few years, the second wave will hit us with all Internet, all Cloud world, and the market will change permanently for enterprise networking.

It happened in telecommunications (Motorola to Google), it happened in computing (IBM to Cloud), it happened in consumer electronics (Philips to China), and it will happen to enterprise networking. While it might sound like it is a “David vs Goliath” battle in SD-WAN today, when you look at upstarts like us at Lavelle Networks and the industry giants, we all know who won that day in the Valley of Elah. Because that battle was one of agility and nimbleness, not of size and strength.

To know more about Lavelle Networks’ SD-WAN platform, which is a 100% SDN architecture and zero protocol conversion, get in touch with us Here.

What is Hyperconverged Infrastructure? Does it suite all Enterprises?
The Importance of Network Analytics