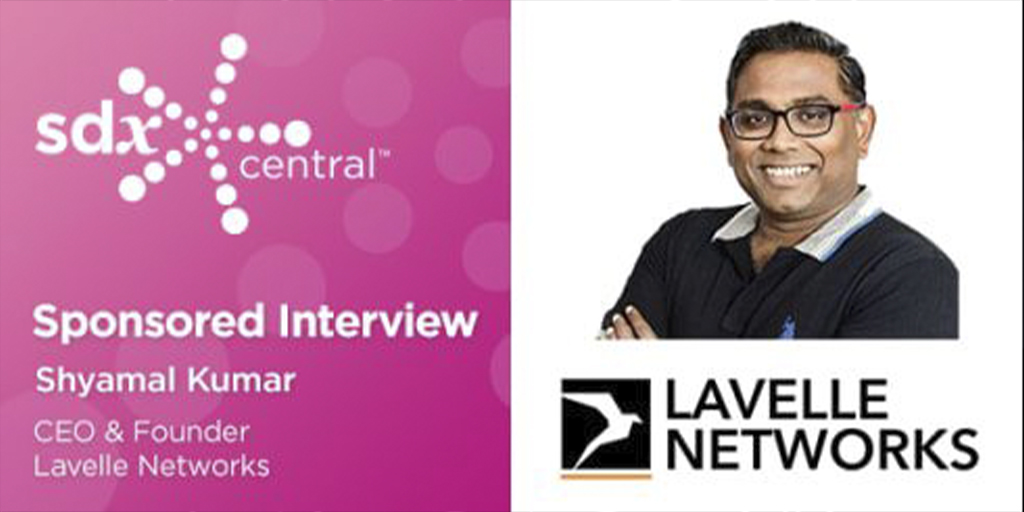 Lavelle Networks offers a hybrid SD-WAN solution that extends the WAN across an enterprise’s physical and virtual resources, treating the cloud like another branch office that is connected to the network. It is also an effective MPLS replacement that allows an enterprise to gradually migrate existing MPLS-based WAN to an Internet-based WAN.

The company got its start in India but is broadening its reach into the Middle East, Southeast Asia, and the United States.

In this interview with Lavelle Networks CEO Shyamal Kumar he shares his views on SD-WAN and how Lavelle has incorporated some of the principles of B4 to create a pure networking software solution.

SDxCentral: Lavelle is a fairly young company. Tell me how the company started.

We believe that SDN—in its true sense—is about building great networking software, minus the overhead of network protocol convergence, which is the dreaded reason for network complexity. SDN is all about preparing enterprises for the surge in cloud and software-as-a-service (SaaS) applications coming our way. India (our home turf) is increasingly a mobile workforce environment, and every enterprise is distributed, so we put two and two together and decided to go after SD-WAN the right way. We saw an exciting opportunity to create a pure networking software solution that used some of the principles of B4, and we took it.

Why is the WAN a bottleneck in the networking world?

WAN is about connecting people and applications, and the most fundamental construct of connectivity is bandwidth. But networking folks never envisioned a world where always-available bandwidth would be a utility like electricity—with adequate security and reliability. We allowed the enterprise WAN (like MPLS and leased lines) to develop independently of the Internet … which really is the largest WAN.

We face a strange situation: MPLS has the tools to provide quality of service (QoS) and reasonable security, but it doesn’t scale economically or operationally. The Internet has proven it can scale, but it lacks inherent QoS, security, and reliability.

Every enterprise needs more bandwidth because applications need them. Every enterprise SaaS provider dreads that support call where their customer says: “The web session isn’t loading.”

When you start a branch office, you tap into the electricity grid and turn on your lights. Unfortunately, you can’t tap into a high-bandwidth utility grid and start accessing your cloud applications. That’s really why the WAN is a bottleneck.

The SD-WAN market is fairly crowded with solution providers. How does Lavelle distinguish itself from the competition?

We believe that for SD-WAN to bring maximum value to enterprises, it should work in large networks so that we can prove that it is indeed as capable as MPLS. SD-WAN should be able to handle any kind of hybrid WAN scenario, whether MPLS, Internet, leased line, 3G/4G, private WAN address, public WAN address, ephemeral WAN address using DHCP, and a host of other variants. At Lavelle Networks, we focus on network scale (our first customer win was a network with more than 1,000 sites), and 100 percent hybrid WAN support. Supporting all possible combinations of hybrid transport is complex, but we want to make sure all use cases of hybrid transport are covered.

The other area we distinguish ourselves is in our extensive work in the public cloud since we began our company: Our virtual appliance was one of the first to be able to use Intel Data Plane Developer Kit (DPDK) acceleration even in the heterogeneous Amazon Web Services (AWS)/Xen environments.

One of the reasons the market is crowded is because the size of the eventual market is going to be huge, and there’s a great opportunity for new players to carve their space. Analysts say that the WAN optimization, router, edge firewall, WiFi controller markets are going to merge into a massive 10 billion-plus WAN edge market.

Your company says it can deliver enterprise networking completely from the cloud. Why is this an important distinction?

Given that networking hardware will become commoditized faster than we can imagine—switching, routing, deep packet inspection (DPI), and WiFi are all available on commodity hardware now, and their functions are easily implementable—the real challenge will be in managing, monitoring, and making the enterprise network work the way you want. Our vision is that the SDN controller in the cloud (as a service) is the true end goal of this transition in enterprise networks.

Networks will be built from commodity hardware and controlled from the cloud. That’s why we offer our SD-WAN controller as a cloud service from Day Zero. Running the controller from the cloud means being able to do massive amounts of real-time analysis for every enterprise, which will bring true agility to enterprise networking.

Many of your customers are in India and the Middle East. Do you have plans to expand beyond those markets? Are there aspects of those markets that are unique to SD-WAN?

We do have plans for that, but we believe that the India and Asia-Pacific markets are big enough for our current go-to-market. We have 15 or more customers within the first year of launching the product, and close to 2,000 cloud ports (that’s what we call our customer premises equipment) shipped to customer locations. In the Asia-Pacific market, we tend to skip earlier technology revisions due to somewhat later adoption of technology (by when the latest form of it is available). So, enterprises in this market that are undergoing a digital transformation for the first time are moving directly to the cloud, without ever having an on-premises application. That’s huge for SD-WAN because it means the need for a next-generation WAN is here and now. Every day, we meet customers whose SAP or CRM deployment in the cloud is stuck because of WAN issues in migrating from MPLS to hybrid transport.

We have plans to expand to other markets in the next 12 to 18 months, in fact, we are in discussions with select US partners. Yes, the WAN is different in each market—for example, there’s lots of IPv6 in Japan, there’s still a need to support T1 in the United States, there’s high-latency Internet in Australia—and we will be able to find the right partnerships and synergies in winning in these markets.

Branch to Multi-Cloud: Ensuring Performance, Reliability and Security with SD-WAN
What are the Major Obstacles Facing the IoT?